In 2013, UK Power Networks unveiled Mosaic art murals on one of their electricity sub stations in Whitechapel. The artwork was created by primary school children as part of a competition and the winning entries transformed into mosaics.

Nirmal Kotecha, director of capital programme and procurement at UK Power Networks, said: “The artwork showcases the rich history and diversity of the East End from a child’s perspective. We hope the community will enjoy this vibrant addition to the street scene for years to come. This project has given us a chance to work closely with schoolchildren in this local community and we can’t wait to see the looks on the children’s faces when their designs are finally unveiled.”

The ten winning designs, which depict images relating to the history of the community, have now been turned into giant mosaics and put onto the wall of the Osborn Street substation. 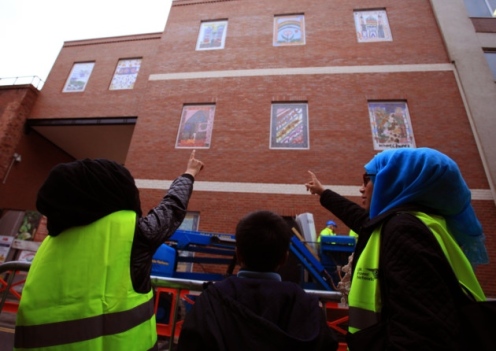 On the other side of Whitechaple in Willis Street, Poplar artist Gary Drostle opened the artwork ‘Electron Flow’  with help from local residents.

A QR code on the design links to a video about the area created by pupils at Langdon Park school.

Mosaic for an electricity sub station in east London, UK, covering over 250 sq ft. The mosaic is made from hand made Venetian Glass Smalti, and forms a circuit around the entire building incorporating a core of transparent glass Smalti which illuminates in the evening. The addition of the night time lighting element in this work not only adds a beautiful evening element to the work but also adds to the theme of the power of the electron.

The artwork aimed to combine a view of the power behind this anonymous block with an element of community expression. The artist took the idea of the basic nature of electricity as a starting point with the idea of portraying the power that is hidden inside the building, reflecting on the idea of electrons flowing through a circuit and the connection of electro-magnetism to the visible spectrum.

The mosaic was designed and made by the artist using the inspiration of the nature of electricity. Clients and community were briefed at every stage of the design and fabrication of the work. The artist included a mosaic making workshop for local residents to raise the awareness and appreciation of mosaic art in the local community and an associated animation workshop was held in a local school. The animated film made by local school children was incorporated in the QR code in the centre of the mosaic.

Winner of the ‘Contemporary Innovation in Mosaic’ award at the 2014 Mosaic Arts International, Houston, Texas