Our belief is that people act out of having a relationship with the environment. If that emotional connection is not there, they won’t care. Rather than relaying messages, it’s about creating experiences and creating an alternative that’s actually more rewarding. I often wonder if it’s as simple as encouraging creativity over consumption. Charlotte Webster, founder and director, Human Nature, London, UK, @HumanNatureArt

2 | Use the media to influence opinion

Here in Pakistan, media plays a huge role in opinion making. Sadly there are other issues which usually dominate TV talks shows and print media. There is an issue of prioritisation and obviously media would have to cater to business interests as well. Climate change probably does not sell very well. In my opinion, cartoonists, filmmakers, actors and journalists should come forward to highlight the issue in their own capacities. Mahboob Mohsin, research analyst,Channel 24 News, Lahore, Pakistan, @MohsinMahboob

3 | Highlight the down side of car culture

Cars are a symbol of wealth and prosperity in industrialising countries, so asking people to give up on owning and using a car is a pretty big ask. But the impact of crowded roads is easy to highlight – excessive pollution, health issues like asthma and respiratory disorders, congestion. This is stuff that most people can understand since they are affected directly. So it helps sometimes to work backwards and highlight the human impacts. Aditi Sinha, communications manager, Shakti Sustainable Energy Foundation, New Delhi, India

Climate change is asking us to care about people we’ve never met and to fight for their happiness as well as our own. I have family in the mid-west who I love deeply but who can’t wrap their heads around climate change because it’s “away”. The times when we can have a truly heartfelt conversation about this is when I bring the human element into it, to talk about my friend Abrar in Bangladesh and his infant daughter, to talk about real humans and their stories.Slater Jewell-Kemker, filmmaker, An Inconvenient Youth, Kawartha Lakes, Canada,@AnIncnvnientYth

The audience drives primetime TV content, rather than the contrary. How many Leonardo DiCaprios do we need to get messages to a wider audience, both public (at the Oscars in February) or corporate (at Davos in January)? Even Olafur Eliasson, one of the best known visual artists, can’t compete (he was also in Davos). In France, the best media for the cause over the last months has been the movie Tomorrow. Everybody feels touched and also empowered after seeing it.Didier Saulnier, founder, artists4climate, Paris, France, @artists4climate

We’ve focused on developing the practical nuts and bolts to help people do sustainability – for everyone in the arts – artists through to tour managers, festivals, buildings. We work with funders and policymakers to put sustainability into the strategy of the sector. We believe that the creative sector is an ecology – from design to heritage – and all of us need to be engaged and talking to one another as well as wider audiences. Alison Tickell, CEO, Julie’s Bicycle, London, UK, @JB_alison

The climate movement in general suffers from exhaustion, burnout, despair. But I think those of us working in creative fields have the benefit of knowing that new possibilities are always just around the corner, and hope is a fully renewable resource. I have a lithograph hanging across from my desk by the US artist Morley. It says “If you’re reading this, there’s still time.” Guy Abrahams, CEO and co-founder, Climarte, Melbourne, Australia, @climarteaus

In museums and galleries we need to protect public space from oil company co-optation. They are trying to present themselves as part of our cultures when really they are destroying them. In the wider social sphere, the more power we take away from oil companies, the less they will use it to block important legislation. Mel Evans, artist and author, Liberate Tate, London, UK, @melllevans

Here in the US unfortunately we are still fighting to prove that climate change is real to many people. The first season of our US documentary TV series Years of Living Dangerously worked to bridge the deep political divide that exists in the country, but for the next season, we will offer concrete solutions. We need to say not only that climate change is happening, but also, here’s the solution. Margaret Badore, web director, Years of Living Dangerously, New York City, USA, @mbadore

Captain Planet created a generation of environmental activists. The show portrayed young people in control, facing serious environmental threats in an accessible and entertaining way for kids. The message of the series is still as important and relevant as it was 25 years ago. It’s sad that the events we portrayed as fantasy have mostly become a reality. Barbara Y.E. Pyle, founder,Captain Planet Foundation, Altanta, USA, @BarbaraPyle1

The challenge is that people are inundated with different messages daily and you need to have a message that stands out – shocks them, makes them laugh. You then have to ensure they want to find out more and take some sort of action.Catherine Rodgers, youth activism coordinator, ActionAid International, Johannesburg, South Africa, @cath_rodg

We need to make it seem real enough that many more people will accept changes in lifestyle and will lobby others to do likewise. The creative industries can help by telling powerful stories in ways that connect, but storytellers need to look closely at real life in many parts of the world to create full global impact and try to inculcate the realisation that “this could happen to me – I’d better start changing”.Lucia Grenna, founder, Connect4Climate, Washington DC, USA, @LuciaGrenna 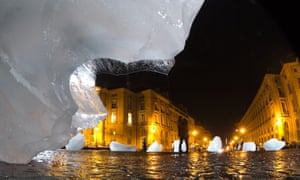 An art installation made with parts of Greenland’s ice cap in Paris at COP21 by Olafur Eliasson. Photograph: Joel Saget/AFP/Getty Images